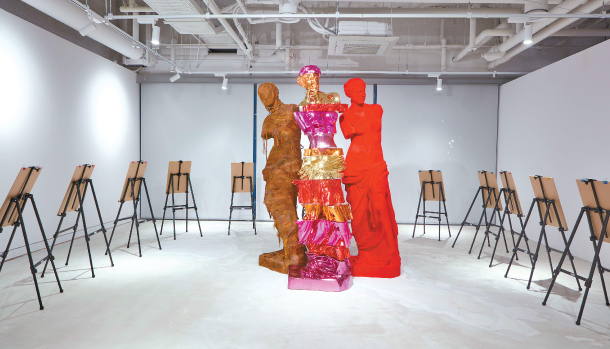 SUWON, Gyeonggi – In a garden of the Suwon Convention Center stands a high column made up of birdhouses.

The sculpture, “Birdhouse,” which will remind art lovers of Constantin Brancusi’s legendary sculpture “Endless Column,” has a strange harmony with the distant high-rise apartment buildings seen over the picturesque Woncheon Reservoir of the Gwanggyo Lake Park, whose neighboring areas are emerging as a new hot residential area for middle-class families.

In the convention center, dozens of piles of green plastic baskets stand on the floor. Passersby are encouraged to push down on any of the piles.

After doing so, they will discover that the pile never collapses but bounces right back into its original form. Above the works, titled “Roly Poly Alchemy,” are seen the glass walls and doors of the new Artspace Gwanggyo.

The works are part of famous artist Choi Jeong-hwa’s solo show as the inaugural exhibition of Artspace Gwanggyo, Suwon’s fourth municipal space for contemporary art shows. Choi also took charge of designing the interior of the space, which opened in the convention center in late March.

The 58-year-old artist has returned soon after wrapping up his six-month solo exhibition, “Choi Jeong-hwa: Blooming Matrix,” at the National Museum of Modern and Contemporary Art (MMCA) Seoul, which was acclaimed by both art critics and the general public, on March 3. While the MMCA Hyundai Motor series show focused on his latest works, the new exhibition, titled “Choi Jeong-hwa, Goods and Things,” is a kind of retrospective, although it is not arranged in chronological order.

The exhibition is divided into roughly six sections, which viewers come to see in turn as they walk in circular way with an education room, located in the center of the exhibition hall, on their right side. “The education room is one of this exhibition’s most important parts,” Choi told the Korea JoongAng Daily.

“There, the derivative art pieces are created, proving that everybody is an artist,” he pointed to drawings by young students hanging on the education room’s walls. They included the students’ own interpretations of Choi’s works or new creations inspired by Choi’s works, many of which were full of humor and originality.

The fourth section of the exhibition is especially for the creation of such art pieces. Viewers are encouraged to draw the three grotesque sculptures Choi created after “The Venus de Milo,” which Korean students will remember as the representative subject for art schools’ drawing exams rather than as an ancient Greek statue in the Louvre Museum in Paris. The viewers will also be encouraged to combine plastic caps of various colors in the splendid installation work “COSMOS+MANDALA.”

In the third and fifth sections, Choi’s various experiments with found objects, photo collages and others in the ’90s are mixed with the new works he created this year, including the several sculptures of fluorescent colors in the “Fine Dust Monument” series.